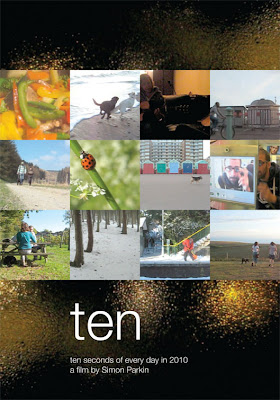 It chronicled ten seconds of Simon's life for every day of 2010 and the result is a really interesting social document. During discussion after the screening, all those present decided that it had made them want to do the same thing, as it is not often we get to look at our lives quite so objectively. It also by turns made people hungry, want to go to the pub, yearn for summer - and fall in love with Simon's dog!

The first month can be viewed here: http://www.youtube.com/watch?v=Sh0UX6T5RRI and Simon will be showing the film in other small venues throughout 2011, so have a look at the facebook link.
Posted by SHOP! at Friday, March 11, 2011

SHOP!
Hello there. This is SHOP. SHOP (Vintage Lounge and Arts Venue) is a Community Interest Company and we exist to provide fashion-forward vintage clothing. This provides the financial means to use the shop space as an arts venue for the benefit of the whole community. SHOP is a welcoming, social and interactive space where spending time is as important as spending money. Remember - we love you and we’re here for you.